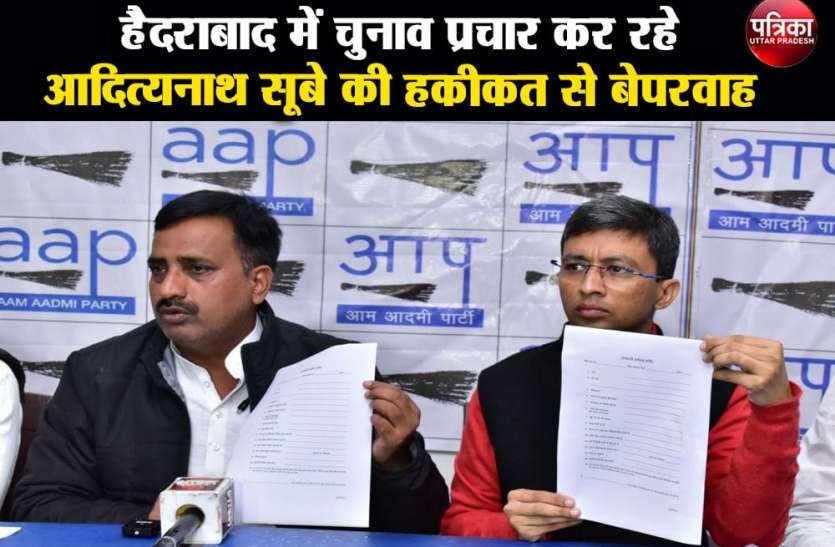 Social and political people are joining the party membership.

Lucknow , State President Sabhajit Singh said during the press conference at the party office in Gomti

Advertisements
Nagar that the winds of change in the state will flow from the village itself. In view of this, the Aam Aadmi Party had announced to contest the panchayat elections in the state. Now the party is starting the process of application for these elections. He further said that the party has issued an application form, in this form, the applicants have been questioned on 15 points, whoever wants to contest the election of the district panchayat with the support of the Aam Aadmi Party, should fill this form by filling the party’s district headquarters or state Must submit to headquarters.

He said that in order to become an Aam Aadmi Party candidate, he is not necessarily a party worker, he can apply all those who are willing to contest the election of Zilla Panchayat. After the application of the candidates, the party will conduct a survey in those areas which will be good candidates, the party will make them the candidates for their district panchayat. He said that ever since the Aam Aadmi Party has decided to contest the election of the District Panchayat, the people who have contested the election of the District Panchayat and other social and political people are taking membership of the party.

He said on the farmers ‘movement, today the farmers’ farmers of our country have to agitate for their rights. Modi government implemented 3 farmers bill in the House for farmers, which does not mention the minimum support price on the crop of farmers, about which farmers are agitating. The Uttar Pradesh unit of the Aam Aadmi Party supports this movement of farmers.

Said Modi had said that the farmers of the country will give one and a half times the price of their crop, but today the farmers are not even getting the minimum support price of their crop. The farmer of Uttar Pradesh is forced to sell 800-1000 ₹ quintan paddy today. The party demands that the government should ensure procurement at paddy purchasing centers to give the minimum support price of their crops to all farmers. Second, the government should withdraw the bill against farmers, and fulfill the demand of farmers. Chief spokesperson Vaibhav Maheshwari said that the activism of the Aam Aadmi Party is continuously increasing in Uttar Pradesh. On the lines of the Delhi model, the party will contest elections in Uttar Pradesh on the basic issues of people, safety of women, farmers’ issues and the issue of students and unemployed.

Regarding the mission power of the Yogi government running in Uttar Pradesh, he said that the much talked about mission power is going on in the state, the Jiksa board has been installed in all the police stations of the state, and it is being said that Yogi Adityanath ji mission power for the safety of women In contrast, the headline of the newspaper is saying something else, in the last 24 hours, 4 murders were committed in Ballia, killing of a teenager, killing of a little girl in Mathura after rape, at Mission Shakti’s desk in Amroha Tampering with deployed female constable. This is the true truth of Yogi’s mission power that he is unaware of.