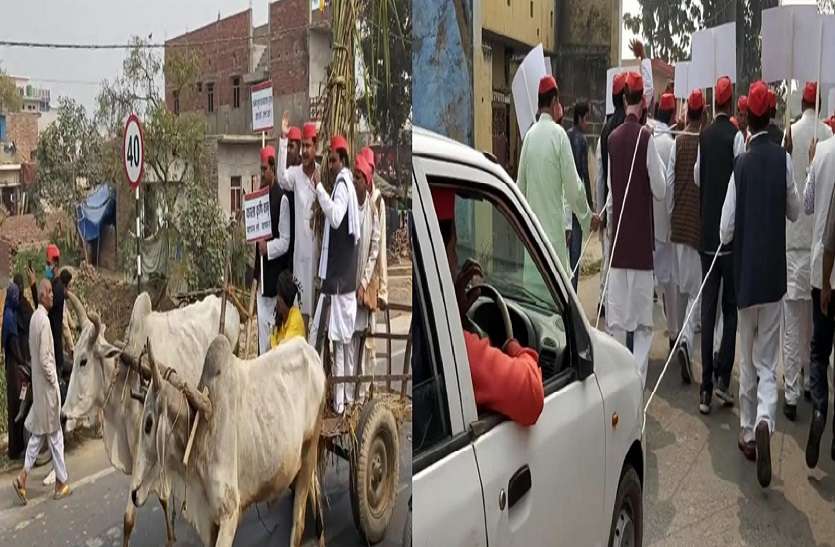 Balrampur. Samajwadi Party took out a procession to protest against the huge increase in petrol, diesel and gas prices in the district. Inflation has also increased due to rising prices of petrol and diesel. In opposition to this, the supporters raised anti-central and state government slogans. On the Buddhist circuit, Samajwadi Party workers, led by former minister Dr. SP Yadav, were seen pulling the petrol car off the ropes. Former Samajwadi Party Minister Dr. SP Yadav said that rising prices of petrol diesel has increased all-round inflation. Due to which the back of the middle class has been broken. SP workers also submitted a memorandum in this regard to the district administration.

Complaint with MLA for removal of possession
Hamirpur. Ramkrishna Putra Chhotelal, a resident of Mangroth village of Sarila police station, Chikasi, has given a complaint letter to MLA Manisha Anuragi, requesting him to remove illegal occupation on the public road. Narendra has 5 bighas of arable land. Before this the village has a domineering lease, but it plots more land than lease. Farmers told that the son of the young man has built a pucca house by a 5 foot pit by the JCB machine. Which left no way to get out. Due to the stoppage of traffic, complaint letter was given to Chikasi police station and SDM Sarila Juber Bag, but no action could be taken so far. Dozens of farmers have demanded action by giving complaint letter to MLA Manisha Anuragi.

Police arrested animal smuggler during encounter
Barabanki The district police has arrested an accused of animal trafficking and cow slaughter after the encounter. During the arrest attempt, the police encounter a vicious criminal. During the encounter, the vicious crook was injured by a police shot in the leg. A policeman has also been injured. Barabanki Police is constantly engaged in the cleansing of criminals and in this sequence, once again the police has got great success. Police have arrested a vicious criminal named Sonu after an encounter near Muskinagar crossing of Safdarganj police station area.

Unidentified armed robbers looted millions at petrol pump
Lalitpur In order to comply with the directives of the Uttar Pradesh Government, Superintendent of Police Pramod Kumar is directing all police station in-charge to check and keep a check on the crime and criminals so that people have faith in law and order. Could. So, at the Meher Wawa filling station of Bihari Lal Sahu located on Pali Road under the local town of Jakhaloun, the police station unidentified robbers carried out the robbery of lakhs on the basis of gunfire and the two salesmen were beaten to death in protest and were shocked. .

A new report by the National Law School on tobacco control...