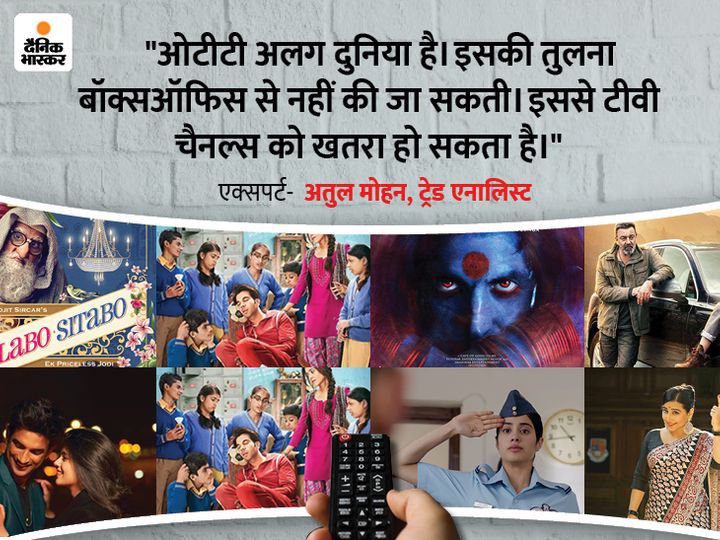 Over 45 films have been released so far this year on the OTT platforms. Some of these films were made directly for these platforms, while there were others which

Advertisements
had to be taken here under compulsion when theaters closed in lockdown. In this process, those filmmakers, whose budget was within 10 to 50 crore rupees, took advantage. But the makers of big budget films like ‘Lakshmi’ had to be satisfied with their cost.

According to media reports, Lakshmi was sold for about Rs 125 crore for the OTT platform. Despite this, it is surprised to find only the cost of the film. The budget of the film was not clearly disclosed. But, there is a buzz in the corridors of the trade that the fees of Akshay for this was around 100 crores (Signing Amount + Profit Sharing). Then fees from other artists and film team. Also, other expenses incurred in making it more expensive.

According to trade experts, the makers have not made any profit from this film. Even if they had made a profit, it would have been very less. According to the Box Office India report, if the film were released in theaters, it would have easily collected a collection of about 141 crores at the domestic box office. 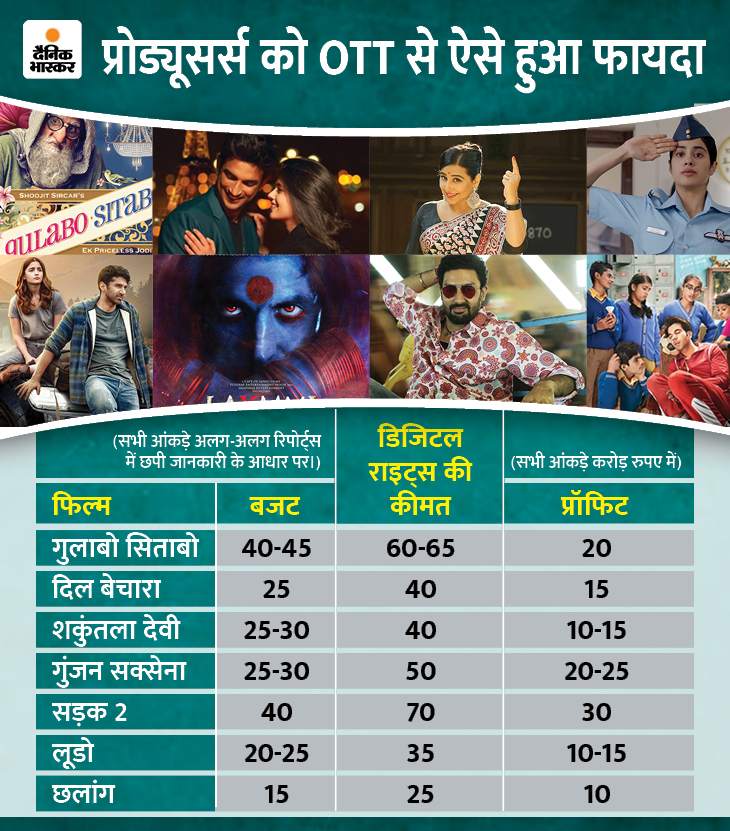 Such a bargain for some producers

One of the advantages of averaging, medium and some big budget producers to release their film on OTT is that they deal directly with it. For this, he did not have to share the collection with any trader or distributor. With the extra expenditure on publicity is saved.

For example, if ‘Gulabo Sitabo’ had come to the box office, according to Box Office India report, it would not have been able to earn even 60 crores at the domestic box office. In addition, exhibitors would also have a part in the film’s collection. Also, with the expenditure of about 10 crores on promotion, its budget would have increased to about 55 crores rupees. Accordingly, after the release, the producers could hardly get 30 crores, which is less than the budget of the film. However, this formula does not fit all films.

Movies currently being sold on OTT

Due to the closure of cinema, filmmakers get a premium of 30–40 per cent to show their films directly on OTT platforms. For example, if a film’s OTT rights were sold for Rs 20-25 crores after its release in the theater, then, if it was taken directly to OTT, the rights were sold for 30 to 35 crores.

According to Atul Mohan, trade analyst and editor of Complete Cinema Magazine, OTT is a boon for short films because they are getting at least a chance to show their content. They do not earn much. The makers of these films push to sell their content and sell it to the traders when there is no way out. Traders buy 25–50 million rupees for 2.50–3 crore films.

By buying 8-10 such films for 2.50-3 crores, they simultaneously sell their connections (OTT and satellite channels) for 3-3.50 crores. Since these traders are regular suppliers, there is no bargaining. On the other hand, big makers make direct deals. Therefore, whatever they get above the budget is their profit. 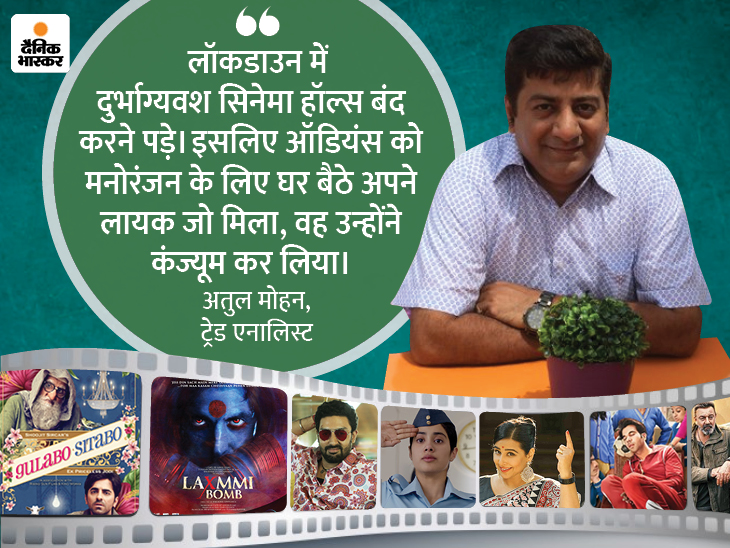 Atul Mohan says, “OTT is a different world. It cannot be compared to the box office. It can threaten TV channels. I think everyone pays Rs 1000-2000 a year or Rs 500-600 a month.” Cannot subscribe to it. Unfortunately cinema halls had to be shut down in lockdown, so the audience was able to consume what they found worth sitting at home for entertainment. Once the cinema and life are in the routine, people are so dedicated Probably won’t go to OTT. “

Losses to OTT even for very small filmmakers

Atul Mohan says that no producer wants to sell his film at a loss. Unless he has no compulsion. The compulsion here refers to those small filmmakers who do not know about the industry and what is the recovery. Which some people ignore.

Atul Mohan said, “These are the kind of producers who have to sell 20 million or 3 million of their 30 million film compulsions. Whereas, big producers are smart because they know everything. In any business, then you You can earn profit only when you have an understanding of that business. New people come in every field, but those who do not understand have to shut down their business. “

Directed by Ranjan Chandel this year, ‘Bombad’ was the first film on the OTT platform to debut by Aditya Rawal, Paresh Rawal’s son. The film premiered on G-5 on 10 April. But the release of the films on OTT was discussed with the premiere of Amitabh Bachchan and Ayushmann Khurrana starrer ‘Gulabo Sitabho’, which hit Amazon Prime Video on June 12. 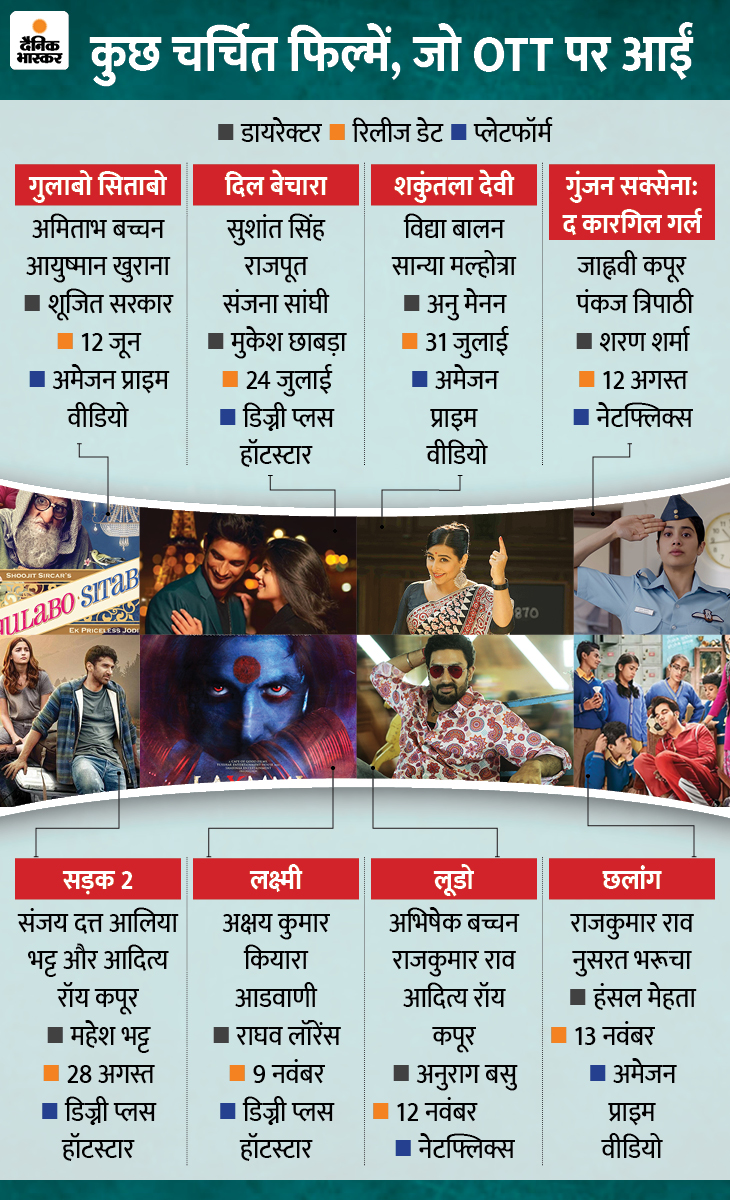 Filmmaker, who won several National Awards: Sumitra Bhave, who was no more, won the National Award for the first film, the last film was...

Ramadan 2021: Know all about different kinds of dates – which one to eat for anemia and which one is good for constipation