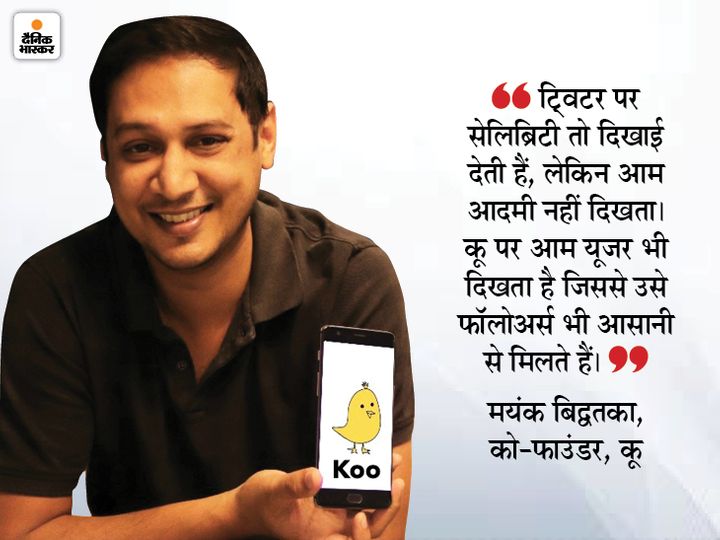 Advertisements
Kuo is in discussion Many big personalities of the country have joined this. The company has set a target to add 100 million users to this platform this year. Co-founder Mayank Bidwatka, who oversees the product development, technology and marketing of the app, shared with us everything related to it.

1. Where did Ku’s plan come from and what does it mean?
Earlier we used to run an internet company for Urban Indians. Used to do bus ticketing online. But we wanted to create something that would benefit 100 crore Indians. For this it was very important to break the language barrier. Because most languages ​​are spoken in our country. In such a situation, it was necessary to create a platform that every Indian could use. With this thinking, we prepared Ku.

Ku’s name was chosen because we wanted to keep a name that would be understood by all people. Birds have been used for messaging. Especially messages were sent through pigeon. In such a situation, we needed a bird logo. We chose the yellow color bird, because the yellow color has positiveness.

2. How is Ku different from Twitter?
When you select your favorite language on Ku, then you see the same language message. The advantage of this is that people are able to react quickly to an idea. This does not happen on Twitter. Celebrities appear on Twitter, but the common man is not visible. Common user is also visible on Ku, which makes it easy to get followers as well.

4. Can Ku be used worldwide?
It is designed for Indian users, but it can be used by all users around the world. We want the problems of our country to end before this platform. It can be operated from anywhere. Currently, less than 1% of its users are from outside the country.

5. Which languages ​​is Ku supporting?
Currently the app supports 7 languages. It includes Hindi, English, Kannada, Telugu, Tamil, Bengali and Marathi. There will be a total of 25 languages ​​on the app by the end of this year. You can message on it in 140 words. Users also get the option of voice and video messages.

6. Is the sugar funding from the company over?
Shunwei, the only Chinese company, has a single digit investment in the app. This investment was done about two and a half years ago. At that time, Chinese companies were not prohibited from investing in India. In a few days, it will sell all its shares to the Indian company.

7. How much has Ku benefited from the peasant movement?
The app has gained a lot from this movement. Twitter did not do what the government demanded. That is why the government is talking about us now. She realizes that self-reliance is very important. We are local so understand the problem of people here much better.

8. What is the plan to protect the platform from hacking?
All the celebrities who visit Kuo are given a valid tickmark. If the user feels that someone has created a fake profile then they can report to us. Many people are trying to hack our apps. But our security is completely updated. Our security is A class. No one can enter our system and change its name.

On our platform, the same data of the users will appear, which the users will give of their own free will. That is, name, email, date of birth, married status or other information that the user is sharing on his / her choice.

9. Where is Ku’s data server?
It is in Mumbai (India). We have put the server here so that users can get data faster. Suppose if the server is in Singapore then it will have to first send the data from Singapore to Mumbai and then to your local location to access the data. It takes a lot of time. We have made such a system that in the city where you will be, the data will also be there. We call this the Content Delivery Network (CDN).

10. What is the company doing for the funds? How many employees do you have?
We have raised funds of Rs 30 crore for the growth of the company. All these products will be used on development and technology. The company is not generating revenue at the moment. When we reach more than 10 million (1 crore) users, then the revenue model of the company will be generated. Our head office is in Bangalore. There are 40 people working here. All people work for 16 to 18 hours every day.