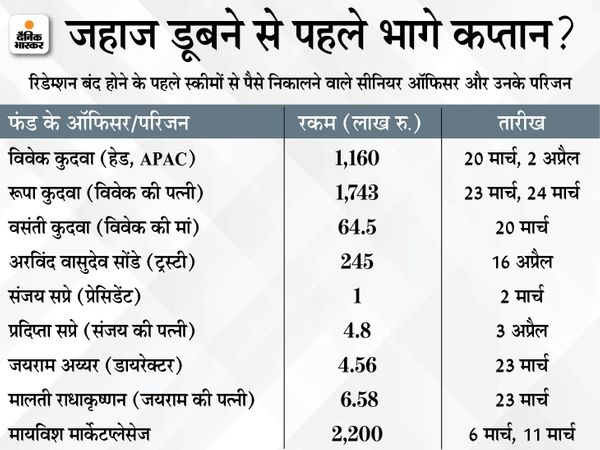 The sinking ship’s captain is expected to leave it at

Advertisements
the very end, but this did not happen in the case of Franklin Templeton’s date schemes. We are talking about the six schemes that the fund house decided to close on 23 April 2020 due to the debt market crisis and redemption pressure. In the forensic investigation conducted by SEBI in this entire case, the top officials of the fund house have allegedly revealed ‘insider trading’.

The top executives and the people associated with them extracted a total of 56 crores in March-April.

The top executives of the fund house, their relatives and trustees sold them in debt schemes before the redemption was discontinued. According to the report, the top executives and their relatives and their associated institutions had pulled out a total of 56 crore rupees in 23 times in March and April. These withdrawals took place when the fund house borrowed heavily from banks in view of the redemption pressure of those schemes.

Among the top executives of the fund house who had withdrawn money from debt schemes before the redemption stopped, Franklin Templeton’s Asia Pacific head Vivek Kudva was the key. His wife Rupa Kudwa (MD of Omidyar Network India) and mother Vasanthi Kudwa also withdrew money from those schemes in March and early April. The amount was also withdrawn from President Sanjay Sapre and his wife Pradipta Sapre, but it was modest. Trustees Arvind Vasudev Sonde, Director Jairam S Iyer were also among those withdrawing money from the schemes.

Vivek Kudwa made the evacuation on 20 March and 2 April.

The first withdrawal from top executives was made by Vivek Kudwa on March 20 and the second withdrawal was made on April 2. The total amount withdrawn from his side was Rs 11.60 crore. The highest amount of Rs.17.45 crores was drawn by his wife Rupa. Rupa sold its units for two consecutive days on 23 and 24 March. Vivek’s mother Vasanthi sold units worth Rs 64.5 lakh.

Sanjay Sapre, president of the fund, withdrew Rs 1 lakh on March 2, while Pradipta Sapre withdrew Rs 4.8 lakh on April 3. The trustee of the fund, Sonde, withdrew Rs 2.45 crore on 16 April. Apart from them, Franklin Templeton’s associate company MyWish Marketplaces sold units worth Rs 22 crore on 6 and 11 March. Vivek is a director in the company. On 20 March and 23 March is very important in the whole event. The fund house had sought SEBI permission to increase its borrowing limit by 20% of its net worth on March 20, which was approved on March 23.

Villain being made investors dragging fund house to court

Between all this, there is another story going on in the market. For the mismanagement of schemes, the fund which should be raised in the box, now the qualities of their bravery are being sung. The anger of investors and the market towards him has turned into sympathy as the fund house has managed to extract Rs 15,000 crore in a weak market. Investors who dragged the fund house to court are being treated as villains for delay in sharing of funds with the schemes.