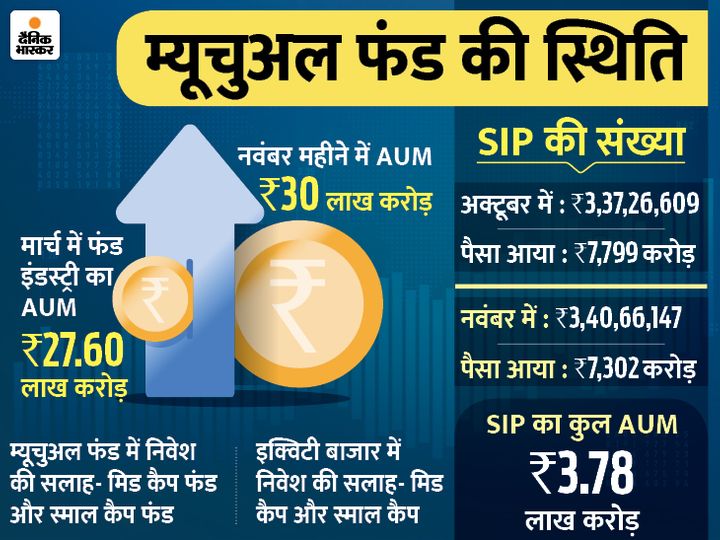 The stock market is at a new high. The Bombay Stock Exchange (BSE) Sensex is close to 47 thousand. Where investors hit 80 in March from the market lows% On the other hand, from the equity scheme of mutual funds, on the other hand, they have withdrawn money in the month of November. However, there have also been several schemes which have given more than 80% advantage from the March low.

According to data from the Association of Mutual Funds in India (AMFI), investors have withdrawn 12 thousand 917 crore rupees from the equity segment of mutual funds in November. With this, the Asset Under Management (AUM) of mutual funds has reached Rs 30 lakh crore. This is its new level. It was Rs 28.23 lakh crore in October. This happened because there is constant investment in debt. Investors have been withdrawing money from equity mutual funds for five consecutive months. However, on the contrary, they are investing heavily in debt mutual funds.

Equity Of All The scheme From Remove Money

Let us know that the stock market reached a low of 25,981 in March. Since then it has grown close to 80%. In such a situation, the investment made at that time has increased considerably today. This is why investors are now withdrawing money from mutual funds. For the first time after four years, in July this year, for the first time, investors have withdrawn money from the equity scheme.

Will get returns in mid cap

Harish Bihani, small-cap fund manager of ICICI Prudential Mutual Fund and Prakash Goyal, mid-cap fund manager, says the midcap portfolio is at a position from which the sector can benefit. This may give further benefit when the rate of cavid infection is low or the vaccine is available. The rally has been visible in the small-cap benchmark, but it still has many names that are in the bottom and can give an advantage.

Pile all Small Cap Fast From outside Huh

According to him, there are still many small caps who have not joined the recent market rally. Whereas in the next one to three years they can go up at an average level. Even from a cyclical perspective, the shares of a large number of companies are available at a good price at this time. Investors should adopt SIP route for such investment.

Now Mid And Small Of speed Will be

Small cap and mid cap will hold fast. In such a situation, investors can take advantage of this sector through small and mid cap funds. Investing in equities through mutual funds always reduces risk. Especially when the SIP route is adopted.

Talking of SIP (SIP), the total SIP in October has been 3 crore 37 lakh 26 thousand 609. Its contribution has been Rs 7,799 crore. Whereas in November the number of SIPs was 3 crore 40 lakh 66 thousand 147 and its contribution has been Rs 7,302 crore. That is, 3.39 lakh SIP accounts have increased at monthly level. The total AUM has increased from Rs 3.42 lakh crore to Rs 3.78 lakh crore during the same period.

ICICI Prudential Of from all more Return

Statistics show that from 23 March 2020 to 14 December 2020 ICICI Prudential Mid Cap has given a gain of 83.98%. SBI Magnum Mid Cap, the country’s largest fund house, has given 81% returns to investors in the same period.