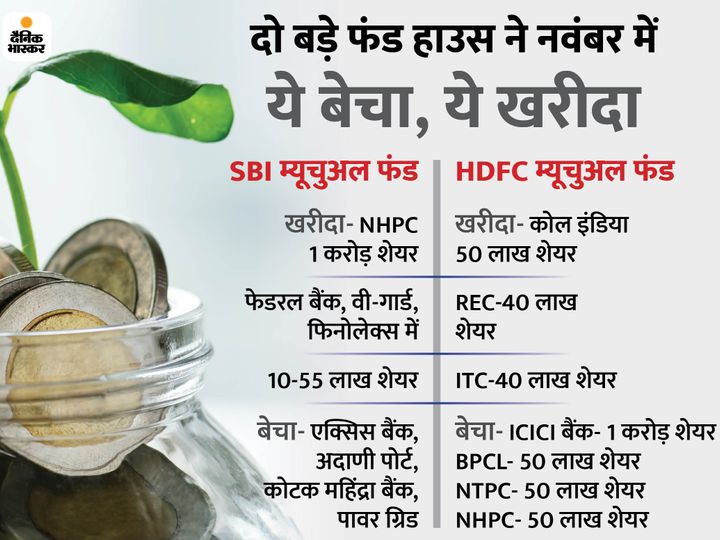 If you are an investor in the stock market then it is very important to know you. You can decide to invest by looking at which shares are bought and which are sold by the two largest fund houses of the country in November. Because the fund house has an experienced team to manage the fund for years, which simply works to buy and sell shares.

Global brokerage house Jefferies has set an ITC target of Rs 265. The stock is currently hovering around Rs 213. Its business is in many sectors. It has benefited from it in Kovid. Similarly, this fund house has also bought fiercely in Sun Pharma, GAIL, Federal Bank, Jamana Auto, Hindalco, Vedanta, Lupine, HCL Technology, Hindustan Aeronautics etc. The shares of these companies have soared from 55 per cent to one-and-a-half times from their March low.

However this fund house has sold one crore shares of ICICI Bank. Ambuja Cement, Tata Steel, Power Grid and Punjab National Bank and Power Grid have sold 50-50 lakh shares each. That is, there is no possibility of further rise in these stocks. Overall, it has increased its stake in 76 shares in November. While reduced the stake in 92 shares.

Shopping at Bank of Baroda

Talking about the sector, the fund house has bought one lakh shares in Bank of Baroda and IDFC First Bank. It has bought 13 thousand shares in Bajaj Auto and 60 thousand shares in Maruti Suzuki. Bought 2.46 lakh shares of Mahindra & Mahindra. Apart from this, the fund house has also bought Cadila Healthcare, Bharat Dynamics, Airtel, DLF, Adani Port, Radico Khaitan, Titan and Allantdi Technology.

Bata India, Colgate, Nalco, VIP Industries have completely exited this fund house. It has made fresh purchases in stocks such as Ashok Leyland, Dabur, Mindspace and Sun TV. Ashok Leyland’s stock has risen 80% in 6 months. Maruti’s target has been increased to Rs 8,677. Meanwhile, the country’s largest fund house SBI Mutual Fund has played bets on some stocks. It has made purchases in small and mid cap. It has bought one crore shares of state-run NHPC. The stock is priced at Rs 22. With the increase in power consumption, the company is seeing a boom in it.

There is a fast outlook on ITC. It has bought shares in SBI, Gland Pharma, Shobha. This fund house manages assets worth Rs 4.58 lakh crore.