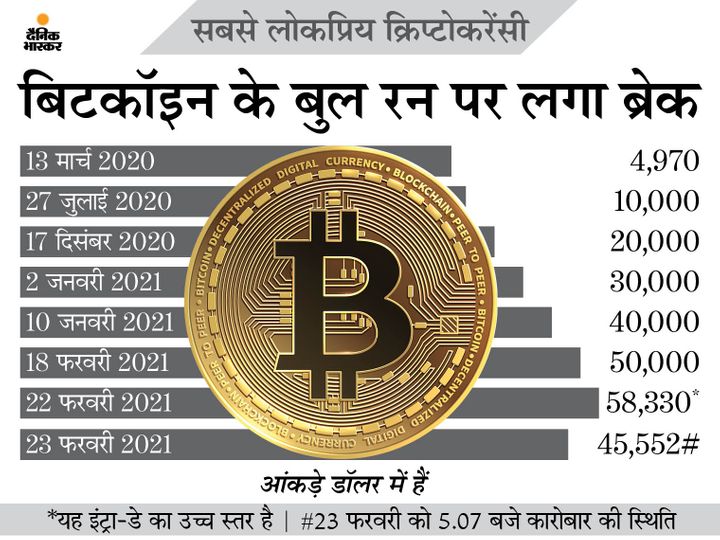 Advertisements
class="" style="word-break:break-word">Bitcoin prices, the most popular cryptocurrency that has been on a continuous upturn for the past several days, have now started to fall. In the past two days, this cryptocurrency has dropped 21% from its top $ 58,330 per unit to $ 45,000 per unit. It was trading at 45,552.94 per unit at 5.7 pm on Tuesday.

Why the record-making bitcoin prices suddenly fell so drastically in February is a big question. Indeed, Elon Musk, CEO of Tesla, the US electric car manufacturer, said in his latest social media post that the decline in cryptocurrency could now begin. Earlier Musk posted on Saturday that cryptocurrencies such as Bitcoin and Ethereum have become quite expensive.

The reason for the recent rise in bitcoin

Bitcoin prices have registered an increase of around 73% in the month of February. The prices were increasing due to the investment in Bitcoin by well-known companies and investors and there were indications of its acceptance. Tesla, a company of Elon Musk himself, also bought $ 1.5 billion worth of bitcoins in January 2021. Musk himself gave this information through social media. Since then, bitcoin prices have been continuously rising.

While announcing the investment in bitcoin, Elon Musk had said that his company Tesla could accept bitcoin as a payment option in the near future. Recently Musk has said that it is better to keep bitcoin than cash. He said that when there is negative real interest in fiat currency (rupee, dollar etc.), no fool would look for another option. Musk has said that Bitcoin also has its drawbacks like fiat currency.

Bitcoin is the world’s most popular cryptocurrency

Bitcoin is a cryptocurrency. There are currently more than 4 thousand cryptocurrencies in the world. Bitcoin is the most popular cryptocurrency among them. Every bitcoin transaction is recorded in the public list through the blockchain. Which is a record maintenance system done by different users in a decentralized way. Cryptocurrency is a kind of virtual currency. Bitcoin is one of its brands.