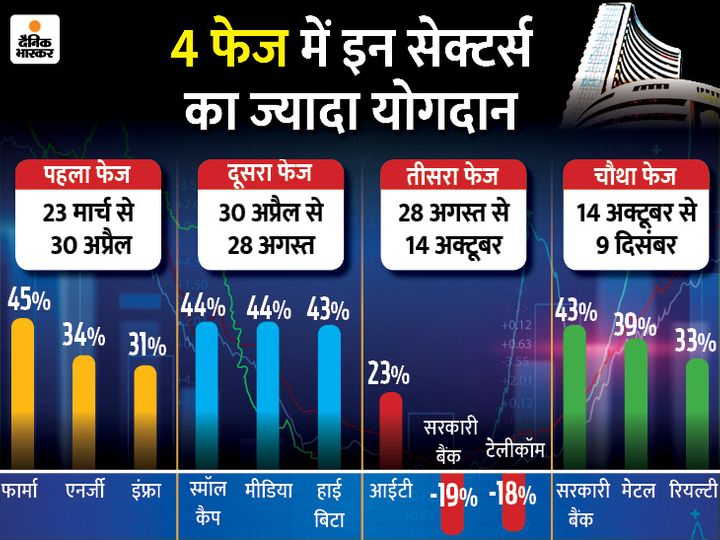 Advertisements
news and heavy investment on the Corona vaccine. On Wednesday, the Sensex closed for the first time beyond 46 thousand. The index is up 77% from its March lows. However, after the announcement of a nationwide lockdown on March 23, the stock market had fallen drastically. The index had closed at the level of 25,981. According to BSE data, the market growth was led by the large-cap sector including mid-cap, small-cap.

If you look at the journey of the market from the bottom level of March to four different phases, then the market boom can be understood in a better way-

In late March, the market witnessed a steep decline due to the nationwide lockdown announcement. On the other hand, the global economy was also sluggish due to increasing cases of Corona virus worldwide. However, till 30 April both the major market indices Nifty and Sensex saw 30-30% recovery from the lower levels. Pharma (45%), Energy (34%) and Infra (31%) were the major contributors. The boom in the energy sector was led by Reliance Industry. Because, the company started selling stake in Jio platform.

The second phase recorded a recovery of over 17-17% in the Nifty and Sensex indices. The main reason for this was the announcement of relief package of about 21 lakh crore rupees by the central government in May. In a total of 6 phases, the government announced a package for different sectors. During this period, 44% in Small Cap, High BITA, 43% in Large Cap, 44% in Media, 37% in Auto, 36% in Metal, 28% in IT, 25% in Pharma, Realty, Government Banks and Energy. 21% gain was recorded.

The pace of the market was very slow in the third phase. The Nifty and Sensex indices recorded growth of only 3-3%. However, in terms of consumption in the domestic market, the period was better than the previous few months. Apart from this, industrial indicators were also strong. The manufacturing PMI stood at 52 in August and 56.8 in September. That means there was growth in this sector. There was also a good growth in railway freight. Export growth in September was + 5.98%. But the market movement slowed due to the growing Corona transition. In this, the IT sector gave a return of 23%. Whereas, there was heavy selling in public sector banks.

The market set several records in the fourth phase of the rally. The Nifty saw 12% and Sensex 13% recovery. This is largely due to both strong global and domestic signals. The main reason is the increasing foreign investment in the market. The net investment by Foreign Institutional Investors (FII) in November alone was the highest level for any month during this period at $ 8.3 billion. In addition, news of Joe Biden’s victory in the US presidential election and the Corona vaccine gained momentum in markets around the world.

During this period, 1.45 lakh crore rupees were declared by the government under Production Linked Incentive (PLI). The second-quarter GDP growth and positive growth on the manufacturing, construction and employment front led to a sharp rally in the stock market. During this period, the PSU rose 43% in the bank sector, 39% in metal, 33% in realty, 31% in high beta, 27% in banking and CPSE, 22% in telecom and over 21% in mid cap.

However, the Sensex touched 46,164 and the Nifty touched 13,548 during trading on Wednesday. This is the alltime high level of both indexes. At the same time, the total market cap of the companies listed in the BSE reached a record level of Rs 183 lakh crore. It is currently 182.20 lakh crores.

In the rising market, investors have been advised by ICICI Securities to buy on selected stocks. Large cap has investment advice on SBI Life, Bharti Airtel, NTPC, UltraTech Cement, Infosys, Balkrishna Industries and Abbot India. Apart from this, investment in stocks of Akzo Noble, Jyoti Lab, Quas, Price Pipes and Fittings in mid and small cap is recommended.

Why the market downturn ?: The impact of Corona’s growing outbreak; Foreign investors withdrawing money, Sensex and Nifty slip up to 3% from...